Following the call for the reimagination of public and civic space, LAND launches Signs For Change, a city-wide public art-initiative that reconsiders the power and influence of symbols, signs, and messages. Signs For Change prompts artists to challenge and speak to civic-institutions in a series of flags, posters, and signs hosted at sites throughout Los Angeles.

Informed by artists’ responses to the ongoing call for equality, Signs For Change follows their lead of making signs that function for public use. The works will be available for wide dissemination, as well as an edition format, with 50% of the proceeds going back to support the sustainability of the project and shared with the artist, and 50% being donated to community-based and social justice-facing organizations of the artist’s choosing.

Signs For Change hopes to engender a new paradigm for civic participation that is artist-driven and collectively executed. 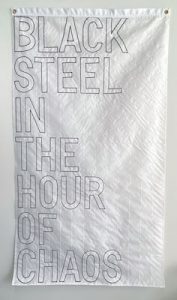 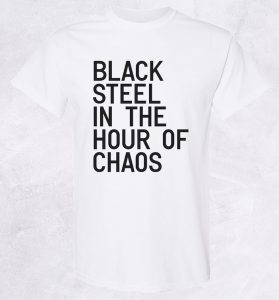 Rirkrit Tiravanija’s Signs for Change flag with LAND features the outlined words “BLACK STEEL IN THE HOUR OF CHAOS” over an all white American flag. The text references Public Enemy’s 1988 song Black Steel In The Hour Of Chaos. Tiravanija’s text-based works, which he describes as “road signs,” invite us to consider how and what messages reach our consciousness on a daily basis. The force of the words encapsulate the foundational shifts that occurred over the past year.
For Signs For Change, Tiravanija chose to benefit the Los Angeles Regional Food Bank, who since 1973, has worked to mobilize resources in the community to alleviate hunger.

Rirkrit Tiravanija was born in Buenos Aires in 1961 and was raised in Thailand, Ethiopia, and Canada. He studied at the Ontario College of Art in Toronto (1980–84), Banff Center School of Fine Arts (1984), School of the Art Institute of Chicago (1984–86), and Whitney Independent Studies Program in New York (1985–86). Since the 1990s, Tiravanija has aligned his artistic production with an ethic of social engagement, often inviting viewers to inhabit and activate his work. In one of his best-known series, begun with pad thai (1990) at the Paula Allen Gallery in New York, Tiravanija rejected traditional art objects altogether and instead cooked and served food for exhibition visitors. Over the following years, the artist ignored the prescribed division between art and life, constructing communal environments that offer a playful alternative venue for quotidian activities. His engagement with propaganda can be seen in his ongoing series of commissioned drawings derived from newspaper images. For his ongoing project The Land (begun in 1998), a collaborative artistic, architectural, and environmental recovery project in Sanpatong, Thailand, residents and artists are welcomed to use a plot of land as a laboratory for development‚ cultivating rice, building sustainable houses, or channeling solar power. 50% of proceeds will be shared with Border Kindness, which will go toward providing food, medical care and other emergency services to asylum-seekers returned to Mexico via Trump’s Migrant Protection Protocols.

The first artist to participate is Los Angeles-based Patrick Martinez, who has created a lawn sign featuring a quote from Henry David Thoreau’s essay, On The Duty of Civil Disobedience:

“If the injustice is part of the necessary friction of the machine of government, let it go, let it go; perchance it will wear smooth,— certainly the machine will wear out. If the injustice has a spring, or a pulley, or a rope, or a crank, exclusively for itself, then perhaps you may consider whether the remedy will not be worse than the evil; but if it is of such a nature that it requires you to be the agent of injustice to another, then, I say, break the law. Let your life be counter friction to stop the machine. What I have to do is to see, at any rate, that I do not lend myself to the wrong which I condemn.”

Martinez takes formal inspiration from the ubiquitous neon signs of his native LA, which populate the city’s strip malls. Instead of announcing a laundromat or pawn shop, Martinez’s neons make urgent statements that draw our attention to current issues of displacement, gentrification, and socio-economic inequalities. At a time of such social upheaval, we are invited to consider the role that we choose to have in the larger systemic injustices which abound.

Patrick Martinez, (b. 1980 Pasadena, CA) earned his BFA with honors from Art Center College of Design in 2005. His work has been exhibited domestically and internationally in Los Angeles, Mexico City, San Francisco, Minneapolis, Miami, New York, Seoul and the Netherlands, at venues including the Studio Museum in Harlem, the Smithsonian National Portrait Gallery, the Tucson Museum of Art, the Albright-Knox Art Gallery, the Cornell Fine Arts Museum, the Vincent Price Art Museum, the Museum of Latin American Art, LA Louver, Galerie Lelong & Co., MACLA, the Chinese American Museum and the Euphrat Museum of Art, among others. Patrick’s work resides in the permanent collections of LACMA, the Smithsonian National Museum of African American History and Culture, the Nerman Museum of Contemporary Art, the Crocker Art Museum, the Cornell Fine Art Museum, the Pizzuti Collection of the Columbus Museum of Art, and the Museum of Latin American Art, among others. Patrick was awarded a Rauschenberg Residency on Captiva Island, FL, to be completed in 2021. Also in 2021 Patrick will be the subject of a solo museum exhibition at the Tucson Museum of Art. Patrick lives and works in Los Angeles, CA and is represented by Charlie James Gallery.

Border Kindness is a nonprofit humanitarian organization that provides asylum-seekers, migrants, refugees, and the displaced with comprehensive services that include food, shelter, clothing, medical care and legal services. Border Kindess’ programs and interventions are designed to identify, protect and nurture the most vulnerable, including women, children, elderly and families.  Proceeds from this edition will go toward providing food, medical care and other emergency services to asylum-seekers returned to Mexico via Trump’s Migrant Protection Protocols.