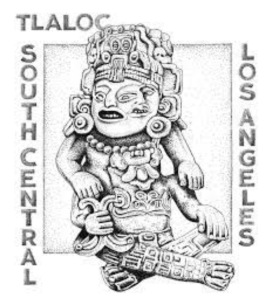 In this LAND Journal entry, learn more about the artist-run space, Tlaloc Studios.

A History of Controversy

Located within South Central, down E. 32nd Street, one can find a series of studios housing various multidisciplinary artists. Alongside these studios lies a small yet striking gallery, showcasing the creativity and talent that each of these artists have to offer.  This intimate and innovative cultural community is known as Tlaloc Studios. Formerly known as Dalton Warehouse, Tlaloc Studios began at the hand of artist Ozzie Juarez, now founder and director of the space. Ozzie was born in Compton and raised in South Central. He always remembers having a passion for the arts, but did not really start his practice until taking arts classes in college. His current work includes a variety of mediums, ranging from paintings to sculptures, influenced by pre-Columbian notes and Aztec influences, while taking more abstract forms. Before its transformation to Tlaloc Studios, Dalton Warehouse was received by the South Central community with resistance, mostly due to concerns about gentrification. This controversy was exacerbated by the fact that most of the artists were not from the area, and were only using the space because it was not as costly as other studios. “They weren’t really involving the community. It was mostly about themselves as artists.” Juarez stated in an interview with the LAist. In fact, in 2018 some of the artwork within the space, as well as some bystanders, were splashed with red paint by protesters. Ozzie Juarez was actually scheduled to showcase some work at this time and was present during the act of protest. His event was ultimately canceled as a result. After this display of opposition, the public presence of the warehouse slowly diminished. The concerns by the community then inspired Ozzie to take action.

In 2019, Ozzie rented his own personal studio within this space. He continued to rent out more and more studios until they were filled with local artists. Thus Tlaloc Studios was born. They officially opened as such in March of 2021.  The name “Tlaloc” comes from the Aztec god of rain, a symbol for earthly fertility. This characterization of the studio was done purposefully as Juarez intended for the studio’s to ultimately act as a resource for the community as well as provide a safe and productive cultural space for the artists working there.  “What I want this to represent is growth, fertility, and abundance,” Juarez said in an interview with Hyperallergic. 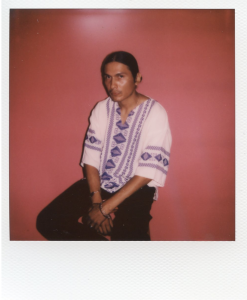 Ozzie Juarez in one of the studios, photographed during Soundscapes event

There are currently several local artists occupying the studios within the space, including Ozzie himself. One of the artists, Johnny Quintanilla, offered some insight about how the studio operates today. Johnny (@artbyzurdo) works mainly as a pop artist influenced by street art across mediums like illustration and painting. He describes his work as a form of storytelling and likes to express current events occurring locally and around the world through his work. He has worked at Tlaloc for nearly a year after befriending Ozzie through his work for a production company. When asked about the studio itself, Quintanilla only offered praises, noting its friendly and creative environment as well stating that it has created a supportive community for artists. “Everybody goes in there to feel inspired and to grow, and to be better not only artists, but to better themselves,” said Quintanilla in our interview with him. “It’s become home to a lot of people to be honest.” Johnny spoke about how many artists go there not only to express themselves and articulate their work but to connect with other artists and to challenge each other to step out of their artistic comfort zones. “We were taking it to another level, and I feel like nobody’s afraid of experimenting with the art.”

When asked about any concerns about resistance from the community, considering the space’s complicated past, Quintanilla said that the community has been very welcoming overall, mentioning that it has helped that some of the artists and the curator were born and raised in South Central. “It does a lot for the gallery, especially for the young kids. It opens up their possibilities and gives them hope that they could one day do something positive for their community.” said Quintanilla. “I think it brings people together, It connects people you know?” This is visible through the support shown by locals viewing the gallery and attending events held there. For the future, Quintanilla hopes to continue inspiring artists, especially young ones, and carrying on Tlaloc’s legacy of growth and building community. 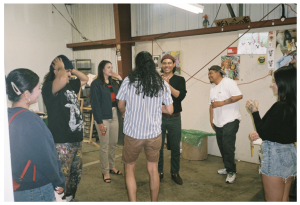 Artists conversing in one of the studios, Johnny Quintanilla featured in the middle wearing a red beanie

LAND was fortunate enough to have recently held a Soundscapes event at Tlaloc Studios. Soundscapes is a new series that highlights artists and performers working with unconventional or unique sensorial and auditory mediums, intended to make this kind of art widely available to the greater Los Angeles community. For the initial Soundscapes programming, LAND has curated a series of LA Summer Mixes, inviting artists to create a mix reflecting their relationship with place. Ozzie Juarez, inspired by his time living in South Central, curated his own playlist (available on Spotify and Apple Music) which was then played at Tlaloc Studios during the event. After the listening party for the first mix of the Summer, a musical performance by artist Gemma Castro was held within the gallery space of the studios. Gemma is a first-generation Chicana composer, audio engineer, and performer based in L.A. At Tlaloc Studios, she sang a series of original songs accompanied by the creative ambiance of the gallery area. Along with the playlist and performance, Ozzie was asked to take pictures around South Central tailored to the experience of living and growing up in this area. These can be found on our instagram @nomadicdivision. An installation by Anita Herrera was also included within the gallery space of the studios titled “Disco Pinata: A Celebration of Familia, Identity & L.A. Nightlife”. After the success of this part of the Soundscapes project at Tlaloc Studios we look forward to the next Soundscapes events throughout the Summer. We also invite and encourage you to visit Tlaloc Studios and the artists working there, including Ozzie himself. They are truly building something beautiful within their efforts of creating an artistic community and showcasing their talents to the public. 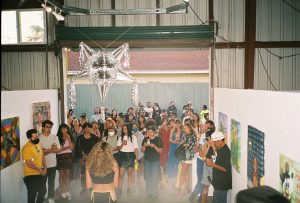 All photos courtesy of Ruben Preciado

Matt Stromberg. “Opening in South Central LA, Tlaloc Studios Hopes to Be a Resource for the Community.” Hyperallergic, https://hyperallergic.com/631844/tlaloc-studios-ozzie-juarez-los-angeles/