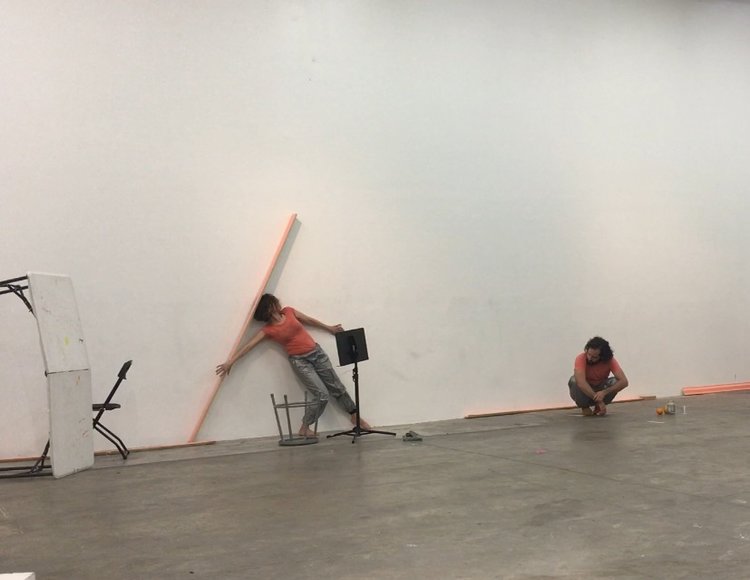 Although identified as musician and dancer respectively, we discovered that fundamentally we do the same work. We activate everyday materials using noise, rhythm, and metaphor. We work in the overlapping spaces of movement and sound to create new relationships with our materials and each other. We trust a primordial impetus to engage our bodies doggedly, insistently, with the task at hand.

Beginning each time with a new set of untested objects, INVENTORY builds a micro-world of rhythmic, visual, and physical events that are always near collapse.

ABOUT COREY FOGEL:  Corey Fogel is a Los Angeles based artist and percussionist. His practice is based on spontaneous encounters, often involving the intersection of sounds, objects, textiles, foods, and often includes collaboration with other musicians and artists. Fogel engages the viewer to consider sound as a medium on par with paint and cellulose, a constant in our daily lives. Through his work, he challenges us to find the contexts in which we create, store, and understand sound.  Fogel received his MFA at CalArts in 2004 and is currently pursuing a Ph.D. in Integrated Composition, Improvisation, and Technology at the University of California, Irvine.

ABOUT ABIGAIL LEVINE :  Abigail Levine is a New York-based choreographer and performer. Her works are rooted in dance and draw from visual and performance art. She holds a Masters in Dance and Performance Studies from New York University under the advisement of André Lepecki and was the 2013-15 editor of Movement Research’s digital performance journal Critical Correspondence, where she co-curated the Dance and the Museum project. Levine is currently a visiting professor in Dance at Wesleyan University.

Abigail was a reperformer in Marina Abramovic’s retrospective at the Museum of Modern Art and will return to MoMA in Fall 2018 to performer Yvonne Rainer’s Talking Solo and other early works. She has also performed in the work of Carolee Schneemann, Clarinda Mac Low, Asad Raza, Larissa Velez-Jackson, Will Rawls, and Mark Dendy.