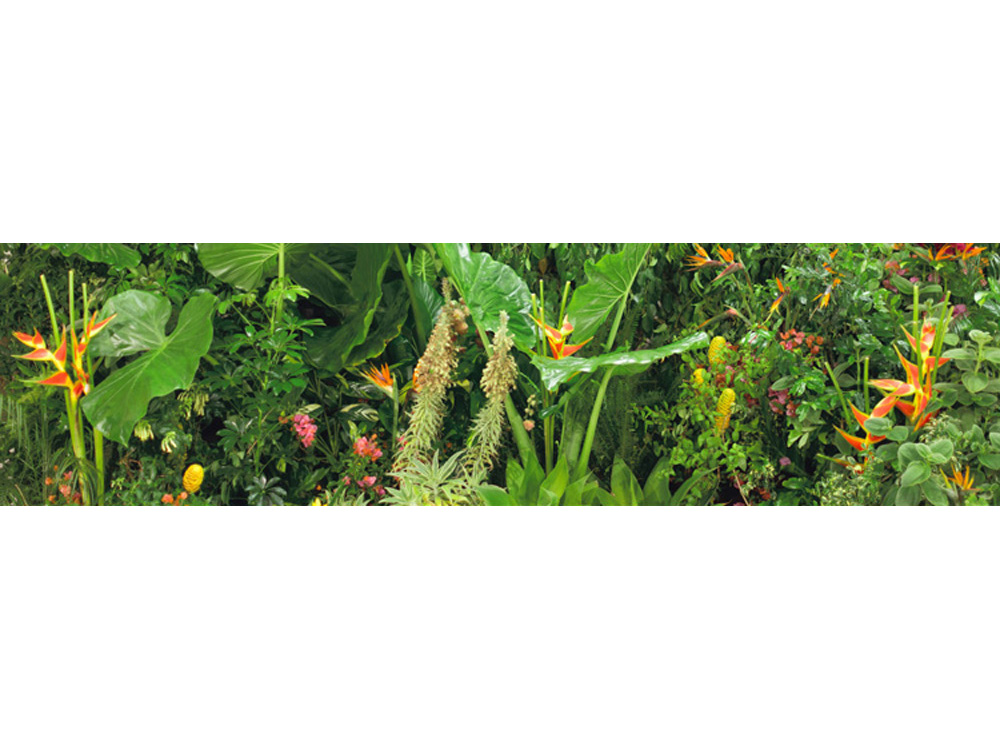 Zoe Crosher‘s chapter of The Manifest Destiny Billboard Project, entitled LA-LIKE: Shangri-LA’d, was created by staging a lush landscape in the former Communist Chinese Headquarters at Mandarin Plaza in Los Angeles’s Chinatown. The entropic installation was documented by Crosher onsite to track the gradually transforming and decaying façade of a landscape. Crosher collaborated with florist Hollyflora to create a wall of flora and fauna that embodies the fantasy of Los Angeles and the promise of the western ideal. As the billboards unfold over space and time traveling west along I-10 in the Palm Springs, CA area, the lush green foliage, symbolic of the promise of abundance/fecundity and in stark contrast to the barren desert landscape, becomes increasingly withered and brown. The falsity of the romanticized notion of Manifest Destiny is manifest in her billboards as the promise of riches slowly degrades and fades away, just as the intangible American Dream slips away from those in its pursuit.

The launch of the billboards was presented in conjunction with Crosher’s installation Expanded LA-LIKE: The Actual Shangri-LA’d Disappearing Wall at the Palm Springs Art Museum in Palm Desert. Various activations and events took place during the opening weekend celebration, including the unveiling of a version of the flora wall depicted on Crosher’s billboards, made in collaboration with Palm Springs floral artist Briana Burt of Eventscapes, along with two performances of Scott Benzel’s Desert Center (Composition I-10, Mvmt IV: Dusk), a sound composition designed to respond to the traffic patterns and harmonics of I-10. For more information, please visit www.psmuseum.org, or call (760) 346-5600.

Zoe Crosher (b. Santa Rosa, CA) is a Los Angeles-based artist whose multifaceted practice uses the Los Angeles cityscape and Hollywood celebrity culture as the basis for fictional documentaries that explore the fantasy of expectations and the false promise of travel, identity, and transience.

We suggest the following hotels to stay the weekend:

Special thanks to the Palm Springs Art Museum, Hollyflora, and Hasselblad.