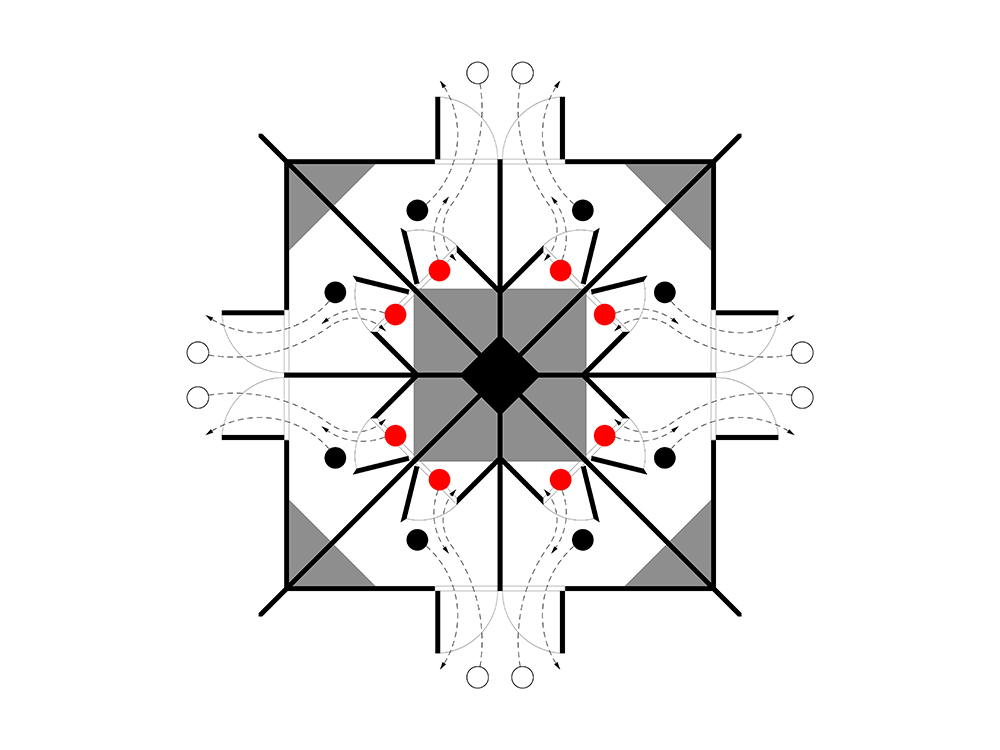 The Ring was the latest in a series of performed sculptural works by Iván Navarro and Courtney Smith. Since 2014, the two artists have collaborated to produce participatory performance-events in the form of guided interactions that occur within a constructed arena. The Ring was a formal design for a social ritual of cooperation and exchange, exploring cyclical systems of giving, receiving and reciprocating as well as providing, acquiring and distributing. Through the ceremonial alternation of roles and the transfer of symbolic objects, individual value is subsumed by the sum of collective action.

Each performance counted on the committed participation of at least 24 to 40 guests. Participants were asked only to interact naturally with each other and the group as a whole, while following a directed sequence of coordinated exchanges during short, timed intervals. The duration of the piece was 26 minutes, which included three eight-minute segments and two one-minute interludes.

On view post-performance were the sculptural elements that remained from The Ring: a constructed arena of concentric squares, geometrically subdivided into a series of separate compartments that was previously occupied individually by the participants. Directly above the center point of the concentric squares hung a fluorescent chandelier, as the only source of light within the ring.

ABOUT IVÁN NAVARRO AND COURTNEY SMITH: Iván Navarro was born in 1972 in Santiago, Chile, where he grew up during the dictatorship of General Augusto Pinochet. Navarro’s experiences under the regime continues to fuel his examination of sound and electric energy as symbols and tools of power. He is known internationally for his socio-politically charged sculptures of neon, fluorescent and incandescent light. Drawing on social issues and political events, notably the aftermath of Pinochet’s reign and the scars of other dictatorships in Latin America, Navarro creates light works that reflect on the trauma of recent history. Often constructing works that are shaped like chairs, doors, or billboard signs, Navarro repurposes familiar materials to comment on past events, from an ‘electrical chair’ that references the Chilean governments use of electricity as a form of torture, to a table that features a swastika made out of red flowers. Navarro has been the subject of solo exhibitions at the Frost Art Museum in Miami and the SCAD Museum of Art in Savannah. He has also been included in notable group exhibitions, at such institutions as the Museum on the Seam in Jerusalem, El Museo del Barrio in New York, and the Museo de Arte Moderno in Bogotá, Colombia. In 2009, Navarro represented Chile at the Venice Biennale.

Courtney Smith is an artist working in sculpture and performance. Raised in Paris in the 1970s and early 1980s, she went on to study in the United States, graduating from Yale University in 1988 with BA in Comparative Literature and Art. Shortly after graduating, she moved to Rio de Janeiro where she lived uninterruptedly for eleven years. In Brazil, she studied at the Escola de Artes Visuais do Parque Lage and established herself as an artist active in the Brazilian context of the 1990s and early 2000s. In 2000 she transferred her base to New York and began exhibiting internationally, maintaining a studio in Brooklyn and also in Rio. In 2004 she met her partner, artist Iván Navarro, with whom she joined forces personally and professionally. Smith has exhibited her work throughout the United States, Europe and Latin America. Her work has been shown in institutions such as the Museu de Arte Moderna-São Paulo, Museu de Arte Moderna-Rio de Janeiro, Museo de Bellas Artes-Buenos Aires, Museo de Bellas Artes-Santiago de Chile, Centro de Arte Reina Sofia in Madrid, Culturgest in Lisbon, PS1-MoMA, El Museo del Barrio , the Chelsea Art Museum, and the Brooklyn Museum in New York. 2014 marked a rupture with her professional past and a reformulation of her artistic project by recasting its fundamental objective and its field of operation. Having reached a point where she felt no longer willing or able to make work as finished objects for exhibition, she began to make sculpture for the sole purpose of being momentarily activated in the context of delimited, guided social interactions: “functions” which she creates in collaboration with Navarro.

In 2014, after years of isolated collaborations, Smith and Navarro formed a specific category of conjoint work in sculpture and performance, which Smith now pursues exclusively. Since 2014 Smith and Navarro’s performances have taken place in a variety of contexts, such as workshops, unoccupied buildings or public spaces, either as independent initiatives or commissioned by institutions. Smith and Navarro spent the year of 2015 living and working in Santiago de Chile, returning to their Brooklyn base in 2016.

Special thanks to Central City Association, NOW Art LA, and The Garey Building.

SUPPORT FOR THIS EXHIBITION IS PROVIDED BY: