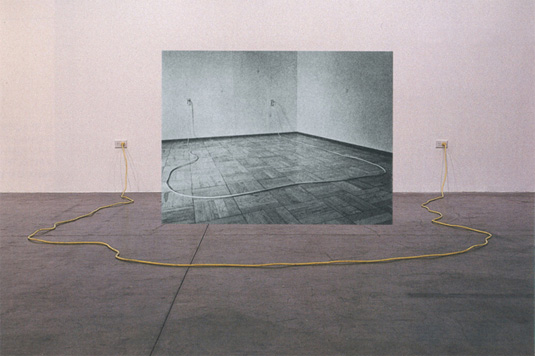 The Invisibility of Form: Early Works By Eugenia Perpetua Butler

Eugenia Perpetua Butler (1947-2008), daughter of gallerist Eugenia Butler, Sr. (1922-2001) and lawyer James G. Butler (1920-2005), was a Los Angeles-based conceptual artist and the eldest of eight children. From an early age, artists, writers, and creative-minded individuals surrounded Butler, as they regularly frequented her family’s home in Hancock Park for dinner, lodging, and parties. Her experiences in this environment and their exchange of ideas influenced her profoundly. Recounting one experience, Butler said:

“I am twelve. I walk into the kitchen. James Lee Byars has just arrived from Japan. He is eating lunch at the table with my mother and two other artists. They are talking a mile-a-minute and filling the space with their ideas. I listen quietly and I know I want to be part of this.”

The exploration of ideas became near obsession for Butler, and, at the age of 16, she began to exhibit her artwork. Early works, such as Negative Space Hole (1967), aimed to give shape to the immateriality of abstract concepts and what Butler coined as “pre-thought”. In text works, such as The Continuum Through Which a Thought Proceeds (1967) and Vertical Static Electricity Field (1967-1968), she bridges the divide between thought and form, the physical and immaterial, and the known and unknown. In her quest to understand the dematerialization of art, Butler once boldly asked for permission from Jim Melchert, her art professor at UC Berkeley, to take a semester off from school and receive all “A”‘s so that she could study invisibility, to which he agreed.

Despite her exclusion from much contemporary and conceptual art historical discourse, Butler was part of landmark exhibitions including Prospect 69, Dusseldorf; Konzeption/Conception, Leverkusen; and Documenta 72, Kassel. Additionally, Butler was the first, and one of the only, female artists to exhibit at her mother’s gallery (Eugenia Butler Gallery), and her work was included in significant domestic exhibitions including Conception/Perception and 18’6″ x 6’9″ x 11’2-1/2″ x 47″ x 11-3/16″ x 19’8-1/2″ x 31’9-3/16” at the San Francisco Art Institute.