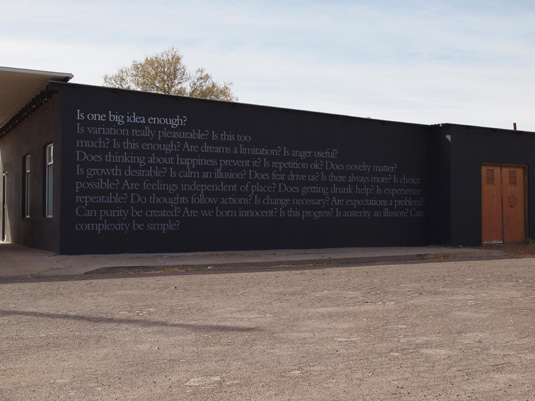 As part of Nothing Beside Remains, Haendel created a textual mural for the facade of the United Artists, Ltd. building. Entitled Questions for Marfa, this installation posited twenty-five questions, each wrought with a seemingly insurmountable opposition: a concrete presentation that can only elicit an abstract response. Conflating two ways of navigating the world that often feel at odds, the work resided in the space between the spiritual and the rational, using definitive language to describe impressionistic thought. While in a way a kind of travel document, sharpened by context and the artist’s individual internal meanderings, the texts belong to a larger search for answers to questions about choice, purpose, belief, desire, success and failure – ultimately, about the nature of happiness.

Specials thanks to United Artists, Ltd.