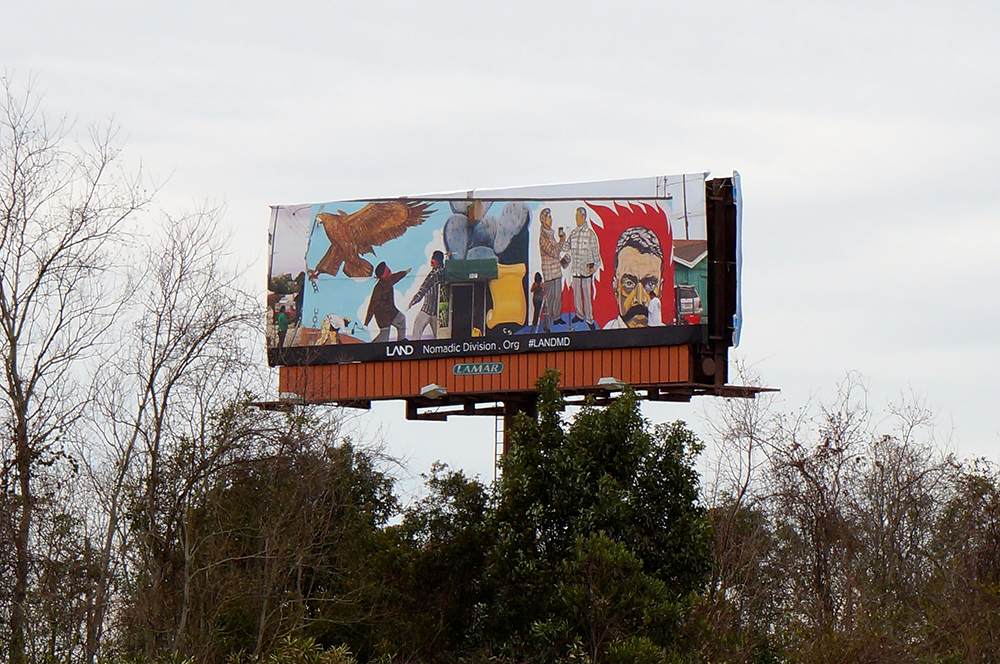 Barrio Aesthetics Exhibition at the Centre for the Living Arts
April 11 – July 27, 2014

LAND (Los Angeles Nomadic Division) was proud to present the second chapter of billboards as part of The Manifest Destiny Billboard Project featuring the work of Mario Ybarra Jr. in Mobile, AL from January 24 through March 19, 2014.

Mario Ybarra Jr. (b. 1973, Los Angeles, CA; lives and works in Wilmington, CA) is a visual and performance artist, educator, founding member of Slanguage collective, and activist who combines street culture with fine art to produce site-specific urban interventions that often bring to light little-known aspects of a particular location’s cultural history. Ybarra Jr.’s chapter of The Manifest Destiny Billboard Project used source material from the artist’s ongoing collection of images of what he calls “barrio aesthetics” in Los Angeles, transplanting these images to billboards spread throughout Mobile, AL. Ybarra Jr. is interested in inserting the daily culture and experience of one city and neighborhood into another, creating artworks that are both contrasting and familiar.

This project is supported by the Robert Rauschenberg Foundation.

Special thanks to the Centre for the Living Arts for their support of Chapter #2: Mario Ybarra Jr. Drinks for the opening reception provided by Fairhope Brewing Company.