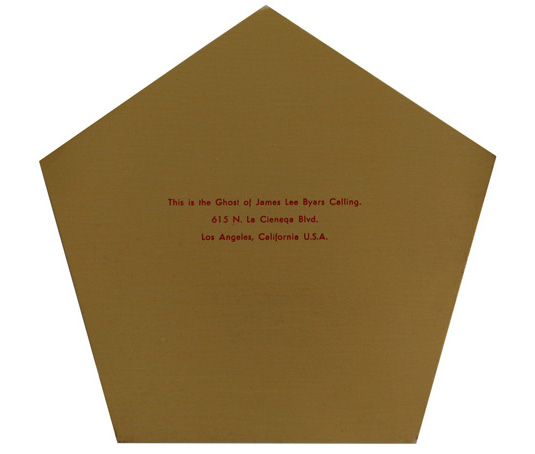 James Lee Byars (born 1932, Detroit, Michigan, died 1997, Cairo, Egypt) was a habitually nomadic multimedia artist, at times residing in Berlin, Egypt, Japan, Nova Scotia, the Swiss Alps, Venice, Los Angeles, and New York. Byars’ ephemeral performances, installations, and text-based works on cloth and paper grapple with concepts such as temporality, transience, and the effect of time and scale on the audience or viewer. Byars often used delicate and decadent materials, such as gold leaf and silk, in his work and everyday life. For Byars, life was to be viewed and treated as art – his daily garb, for example, consisted of lavish silk suits and robes constructed of materials similar to those employed in his objects and installations. He attended Wayne State University and Merrill Palmer School of Psychology, where he studied art, psychology, and philosophy.

Letters and ephemera were a significant element of Byars’ practice and oeuvre. He often wrote elaborately coded letters to James G. Butler, Eugenia Butler, Sr.’s husband. Byars was very close with the Butler family and was a guest at their home in Hancock Park for extended periods of time.

The second part of the exhibition, entitled This is the Ghost of James Lee Byars Calling, transformed the gallery into an entirely red room with a sole light source from a two-and-a-half inch hole cut in the ceiling. The only entrance into the gallery was through a two-and-a-half foot hole, and participants were asked to read various communications (describing Byars) that were sent to the gallery from people around the world to audibly reconstruct the artist.