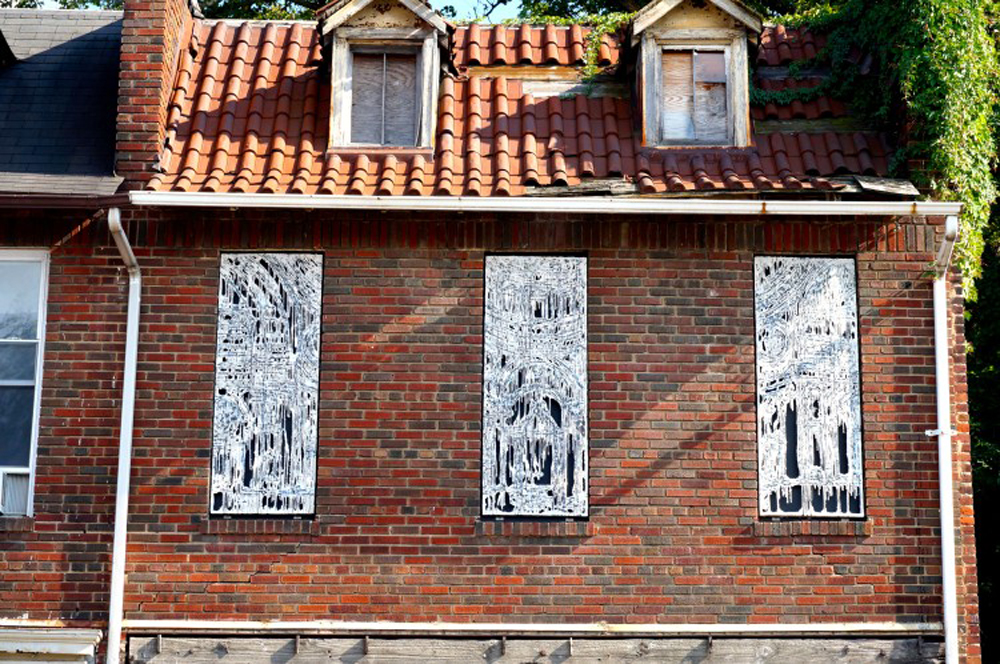 Using an abandoned building, Diana Al-Hadid replaced the aged and warped plywood boards covering the broken windows on the second story with a triptych of panels depicting an interior scene suggestive of Baroque cathedral architecture. The evocation of this majestic built architecture served as conduit between indoor and outdoor as Al-Hadid elevated the blighted residential building, suggesting the potential for change and beauty in an often overlooked site.

Drawing from spaces and places from the past, Al-Hadid’s panels implied a regeneration and potential of what may have been or what is to come within the interior of the space. The surface of the panels were incised and cut out where the “sketch” would have shadowed/darkened space – thus providing a view through the negative spaces of the panels into the void of the building beyond, while simultaneously retaining the illusion of an intact surface. As both an image and a physical conduit, the work encouraged a conversation between past and present, current and future possibilities.

Al-Hadid (b. 1981; Aleppo, Syria) is a Brooklyn-based artist whose large-scale sculptures, drawings, and paintings draw from architectural sources and cues to create works whose materials often contradict their expected physical nature.  Playing with weight and volume, space and negative space, her works have an inherent monumental nature and seem to extend through time.

This work was presented as part of Alter/Abolish/Address, an exhibition of 5 site-specific commissioned projects throughout Washington, D.C. as part of 5×5:2014, a District-wide program of 25 contemporary, temporary public art projects dedicated to exploring new perspectives on the city through the lens of 5 curators, presented by the D.C. Commission on the Arts and Humanities.