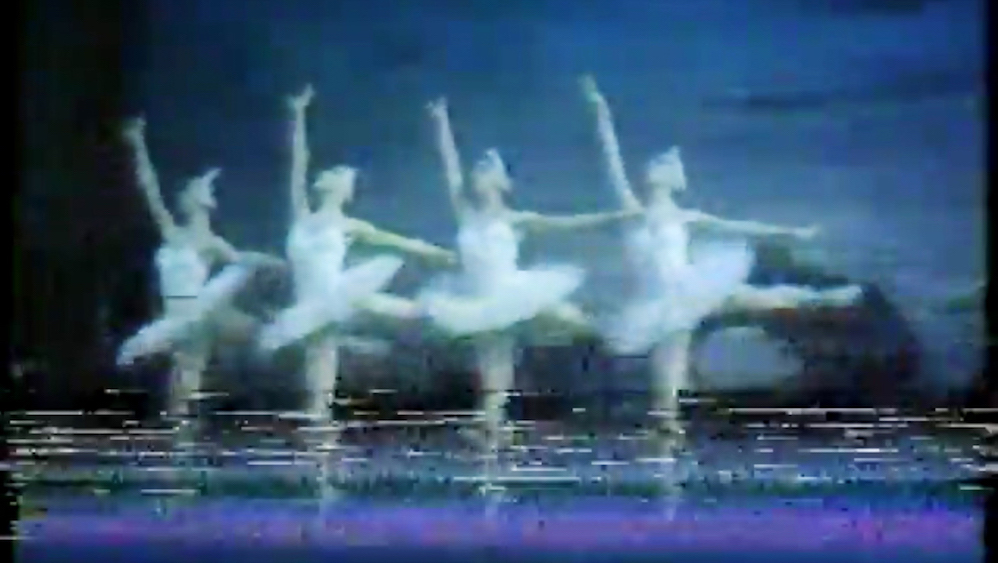 Frame Rate is an on-going programming series with an eye toward film, video, and the moving image in general. The exhibition is free and open to the public.

Regina Mamou’s Looping Swans explores the political aspects of invisible and visible labor. On August 18, 1991, a faction of Communist party hardliners attempted a coup against the President of the USSR, Mikhail Gorbachev. As tanks rolled onto Moscow, state-sponsored television played Swan Lake in lieu of news programming. Mamou’s multi-channel video highlights the “Danse des Petits Cygnes” (Dance of the Little Swans) from Tchaikovsky’s storied ballet, in this iteration performed by the Soviet Union’s Bolshoi Ballet company.

Composed of four dancers, the choreography of the swans incorporates difficult movement complicated by the requirement that the dancers remain in sync at all times with cross-linked hands. In the “Dance of the Little Swans,” the dancers must let go of individuality to seek unity, while masking the aspects of labor, pain, and suffering required of dancers trained at this level.

Developed in response to Regina’s video installation, Maya Gurantz’s performance is set against the video. Including other invited performers, the piece creates and enacts a durational performance score that does not hide the toil of physicality. Inspired by descriptions of the “disappeared” labor in Stalin’s gulags and Stalin’s concomitant love of public displays of synchronized action (parades, complex human pyramids, ballet), Gurantz focuses on the tensions of the body at work.

The last efforts of the Soviet Union included a bumbling plan to prevent Gorbachev from signing a treaty to give greater independence to the Soviet states—one more change among many during the Glasnost period welcomed by Soviet citizens as a warming to the West. As Gorbachev was placed on house arrest at his summer retreat, Swan Lake looped on television, again an attempted distraction as the coup leaders sought to speak for the wishes of the citizens. Ironically, ballet came to Russia through Peter the Great’s pursuit to modernize and “westernize” Russia in the early 18th century. The czars that followed Peter were committed patrons and celebrated the strength of the dancers and the labor enacted by their bodies.

Citizens gathered to protest the coup outside of the Parliament buildings. They had no interest in going “back to how things were,” to a time when their own labor was made invisible. The coup was over in three days and the USSR was dissolved less than five months later.

Looping Swans presents a juxtaposition of invisible and visible labor drawing from ideologies of Soviet communism. These belief systems, however, are not so different from our current milieu, where media tactics, wielded like strategic weapons, are used for political gains.

The artist would like to thank Barnett Cohen, Maura Brewer, Julie Henson, Danny First, Irina Gusin, and Nancy Meyer and the rest of the LAND Team for their support.

ABOUT REGINA MAMOU:  Regina Mamou (b. 1983, Southfield, Michigan) is a Los Angeles based artist. She holds an MFA from the School of the Art Institute of Chicago, a BFA from the Rhode Island School of Design, and was a Fulbright fellow to Jordan. Mamou’s work has been the subject of group and solo exhibitions, including The Alice Gallery, Seattle, Washington; Bert Green Fine Art, Chicago, Illinois; Adjunct Positions, Los Angeles, California; Charlie James Gallery, Los Angeles, California (as part of Pacific Standard Time:LA/LA); and Makan Art Space, Amman, Jordan. She has two forthcoming artist residencies, Haven for Artists, Beirut, Lebanon; and Queens Collective, Marrakech, Morocco, from fall 2018 to winter 2019 respectively.

Mamou has a research-based practice that focuses on the desire to understand the diversity of ideological systems. Her work is an amalgamation of fact and fiction, placing historical information together with falsehood to explore the power of belief systems, especially as it relates to communism and totalitarianism. This interest stems from her familial background where she grew up with the awareness of the implications of political ideology intertwined with religion. Mamou’s mother, who is Polish-American, and Mamou’s father, who is a Christian-Chaldean from Iraq, raised her multiculturally. As a former priest, Mamou’s father left the clergy, and Iraq, for fear of persecution. For this reason, she is interested in not only the examination of social utopias but also the struggle to create community through a dystopian future.

ABOUT MAYA GURANTZ: Maya Gurantz (b. 1977, Oakland, CA; based in Los Angeles). In video, performance, installation, social practice and writing, Maya interrogates social imaginaries of American culture and how constructions of gender, race, class and progress operate in our shared myths, public rituals and private desires. Cycling between intuitive and academic research, the intimately personal and political, Maya adapts, re-enacts, fictionalizes, and re-choreographs history to force viewers to encounter, viscerally, how their most intimately held beliefs belong to a complex lineage of social construction.

Special Thank You to Danny First and The Cabin