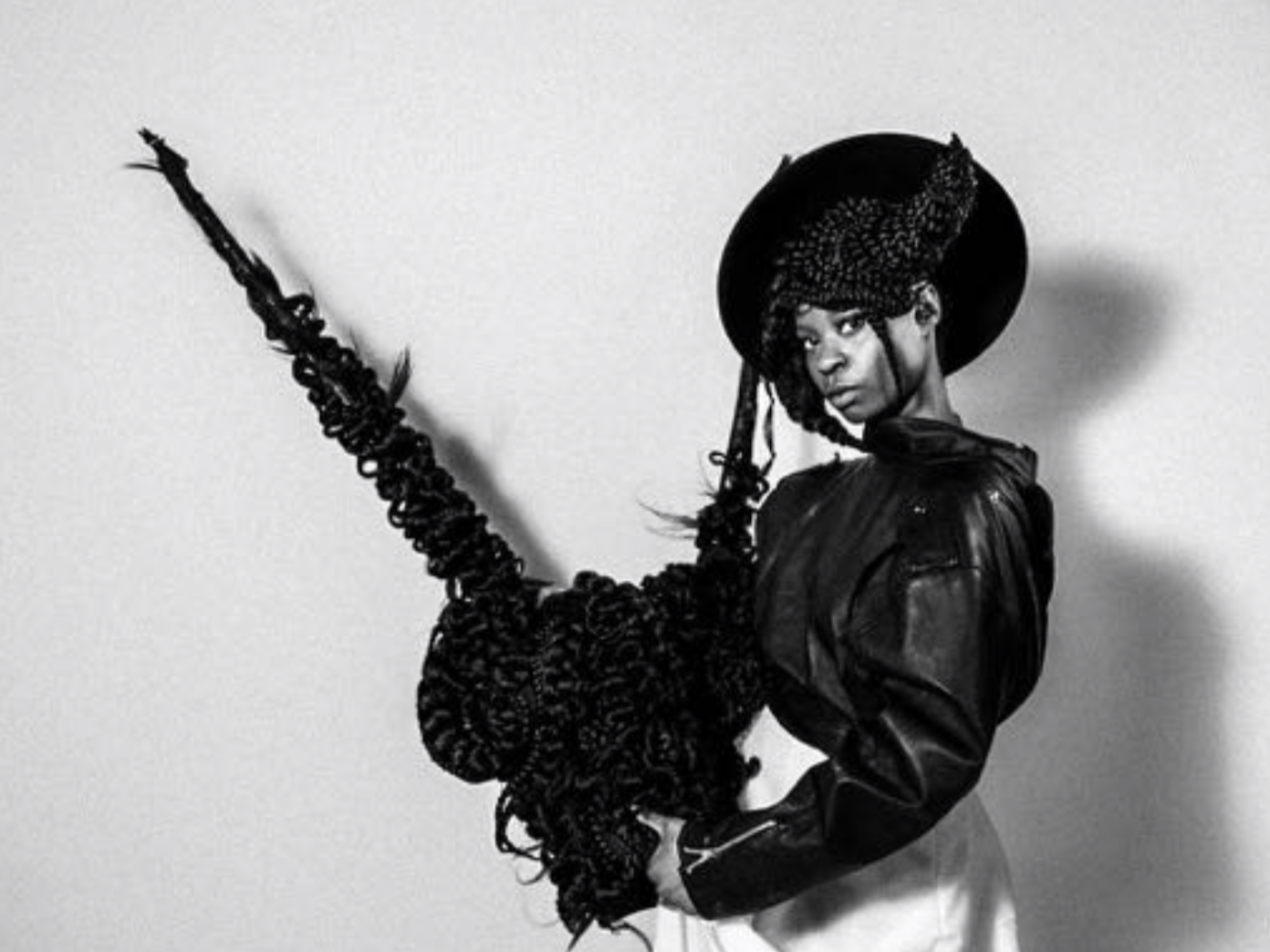 MS: Joanne Petit-Frère, like me, you also have a rather unique surname. Can you tell us more about your family’s origins?

JPF: My family is of Haitian descent and I am the first-born generation raised in Flatbush/Lefferts Garden and Long Island here in Brooklyn, New York.

MS: I ask about your actual name because you’ve taken a playful approach to naming this project including pseudonyms. Can you tell us more about each iteration you’ve gone through?

JPF: Each iteration I’ve gone through has been an encapsulation of that time in my life. BraidCora Quarantina came about during our global pandemic that arose in developing this project. JoGoesWest came about in 2016 when I decided to travel by myself for the first time and took a pilgrimage with my braid sculptures to the West. The first and last image were particularly from this trip and I’ve named the series “Word from out West,” when I collaborated with my friend in Portland, Alex Riedlinger. The pseudonym I worked with prior was called Tresse Agoche, which translates to Braid Left. This was the first time I experimented with one and began to theorize as to why I work with the braid or, at least, what I saw poetically.

MS: Text itself has been given a unique treatment here. It feels as though you’re weaving with words as well. Is that accurate? How does the textual and the sculptural make contact and interpose in the video work?

JPF: Definitely. I’m glad that registers as such, as a form of “text weaving.” I was very fluid in how to punctuate the imagery and share my ruminating thoughts. I wanted to share as if one was reading through my notes like a short story or collection of poems.

MS: Does this relate at all to the ways you seem to intertwine your abiding identity with adopted ones, including fictive names, aspirational places, historic locations, and iconic theorists like Frantz Fanon.

MS: The images that drew me to your practice are elaborate braided sculptures. Can you tell us more about how you developed this sculptural technique? Did you have a teacher?

JPF: This practice developed from my mother’s training in braiding hair for the family. The sculptural technique came later as a teen when I studied at the Fashion Institute of Technology. Experimenting with fashion and studying drapery while being around my Cooper Union friends helped nurture this practice. I didn’t have just one teacher to develop this skill; it was a combination.

MS: You’ve brought these skills to the fashion and pop-music worlds in the past. Can you tell us more about those projects and what prompted the current foray into contemporary art?

JPF: Yes, I’ve been blessed to offer my skills in these arenas. I can share more about these projects in-depth in printed booklets I’ve been cooking to deliver. It’s been a long-time coming. What I can say is that after working with Solange, I started to receive invites to MoMA, NoMA, and the New Museum, but have always had more interest in art spaces than strictly fashion, which is mostly my background.

MS: For this commission, you were working in video. We originally planned a live performance to be presented by LAND at the California African American Museum to activate the sculptures. Tell us how you envision the crossover of the sculpture into other media including video and performance?

JPF: I’ve always been interested in viewing my process through video. I say this during the age of social media, where it’s become casual to share one’s once-private studio practice. So, instead, I used video to strip down and simply share that side with my audience, but still on my own terms. I find it, personally, pretty difficult to transfer out of the meditative state of braiding and sculpting, where there’s no digital technology involved, to then disrupt the flow with it—which most artists can relate too of course. I understand that while it is important to share my work and be of the times technology-wise (LOL), it’s also important for me to reserve some of the magic. For me that means to honor lo-fi means, frankly, as it too is my reality. I only this year have been working with a Mac computer. Zoom, however, I just can’t rock with. Though I envision continuing to share this process in film form, which I think is a healthy balance of reserving yet sharing, I still have more to complete on this collection so you’ll see (laughs). Thank you for being fluid with me during this process and that’s an understatement.

MS: The reason video has become so prominent here has to do, in part, with COVID. Many of the early shots you shared were process shots from the studio. What has quarantine been like from the angle of making and maintaining a studio practice?

JPF: It’s interesting because quarantine hasn’t really changed my practice in the sense of the lifestyle of being locked down in the studio. I think, like most artists, we’re already used to the concept of being locked in and making the best of the materials in front of you. What has changed, though, is working from home mostly instead of the studio. So now I am in the process of moving out of my studio and making a home one due to COVID.

MS: You are based in Brooklyn. How has your community been affected by COVID?

JPF: Earlier in March and April there weren’t many people outdoors—with masks, at that. Slowly but surely that all changed. Everyone was wearing masks suddenly. There was also some time where I spent two weeks at home straight, which was maddening. Luckily, I have roof access for fresh air, but, still, lockdown has also been rough. The markets are getting slim with produce and recently I saw a pantry line in my neighborhood. It’s changing day-to-day especially with all of the protests.

MS: Who have you collaborated with during this project? Music seems to be a strong component.

JPF: My partner Andrew Wayne C. and I have always been interested in learning how we could come together to produce music to couple our work together in video and we finally made it happen. We’re working on a name still but I’m hoping he’ll let me lead with BraidCora. He’s definitely the brains behind the music whereas I’m very new and he’s teaching me. There’s another sound artist by the name A2Z, who I’ll be working with too in the near future. Really excited about this part of the process as the activation of my sculptures works best moving in sound. Speaking of which, Nick Cave is also a huge inspiration.

MS: As an emerging artist gaining new attention for the work you do, how do you envision this project will change your practice, especially after stay-at-home and COVID are finally behind us all?

JPF: I’d imagine more architectural installations would speak more loudly to me, as I’ve dreamed of doing this for years now but never had the downtime of a year to do so, which is how long it’d take me to hone this vision. I have an even greater appreciation for my material as it sourced overseas in China (like most of our products). So there runs the possibility of my having to evolve with the material I find comparable and available. Once COVID is finally behind us, I’d imagine I would appreciate live events that much more. Andrew would be happy to hear this since before COVID, he would perform all the time with his bands. Shout out to Deep Fake & Holy Wisdom!

MS: You’ve been doing a lot of peripheral research and reading for this project. Can you leave us with a quote not included in your video that can serve as inspiration or a final word related to this new work you’ve produced over that last six months?

JPF: “And that is my reason for living. The future must be a construction by the [man or woman] in the present. This future edifice is linked to the present insofar as I consider the present to be overtaken” (bell hooks, Rock My Soul).

“A dark & sci-fi historian named Jo,
‘Goes West’ to write a short film part press release, sans narrative.
She hopes to reimagine her quest in life, by
archiving an audio bio-lo-fi
moving picture & soundscape
inspired by Lorraine Hainsberry’s “To Be Young, Gifted and Black.”
Jo, a Performance Artist
& Nomadic Entrepreneur –
pioneers “On the Road”
w/ millennial challenges
of economics, displacement & identity,
a bit Kerouac-style.
All while en route to her dreamy destination of LA,
the LAND of second-chances.”

Joanne Petit-Frère (b. 1987,  New York) received her BA from the Fashion Institute of Technology. Her work was recently included in A Queen Within: Adorned Archetypes at the Museum of Pop Culture (Seattle, WA) and This Synthetic Moment (Replicant), curated by David Hartt at Philip Martin Gallery (Los Angeles, CA). Her work has been included in recent performances and exhibitions at MoMA PS1 (New York, NY); New Orleans Museum of Art (New Orleans, CA); and The Ethelbert Cooper Gallery of African and African American Art, Harvard University (Cambridge, MA). Petit-Frère has created custom hair sculptures for Beyonce, Solange Knowles, Les Nubians, and Janelle Monae, among others. Her work has been featured in publications such as Vogue, Vogue Italia, Vogue Japan, The New Yorker, The Evening Standard, AnOther Magazine, and Cultured Magazine. Petit-Frère lives and works in New York, NY.

Brooklyn-based artist Joanne Petit-Frère’s BRAID.CORA QUARANTINA 2020 (POST.JUNETEENTH) is a short docu-film performance that chronicles the artist’s studio practice during quarantine and the creation of her hair-braided sculptures. The work is commissioned by LAND (Los Angeles Nomadic Division) and co-presented with the California African American Museum. This co-presentation is curated by Matthew Schum and made possible in part by a grant from the Los Angeles City Department of Cultural Affairs.