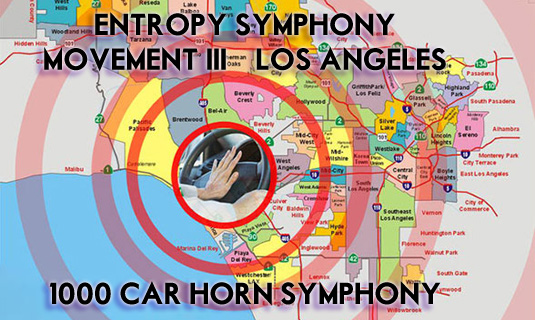 On one hand, it is the promised land of sunshine and relaxation; on the other, it is the home of the freeway and frustration. At the center sits the integral key: the mighty car – mobility providing access to the joys that lift each modern resident (and to the incessant tasks that weigh them down). The journey is most often seen as an obstacle, something to be calculated, cussed at, and through with as soon as possible. The instrument for these errands is as beloved as it is despised in the eternal push and pull between love and hate, the nest versus the coffin.

Using the Janus of Los Angeles as the instrument most perfectly tuned to sing the song of its citizens, 1000 car horns rang out in a symphony composed to bring forth the passion of the city of angels. For five minutes, from San Pedro to Silver Lake, the lifeblood of LA rang out in harmony, bringing the city together in seraphic sound as it is used as a resonating chamber and became the grand horn of its people.

Zefrey Throwell is a New York-based artist who works with video, radio, painting, and people in order to explore the connecting points and underpinnings of social discourse. His work has been exhibited at the Whitney Museum of American Art, New York; the Queens Museum of Art, Queens; and the Guggenheim Museum, New York. His work is in the permanent collection at the Museum of Modern Art, New York as well as in the Hall Collection.