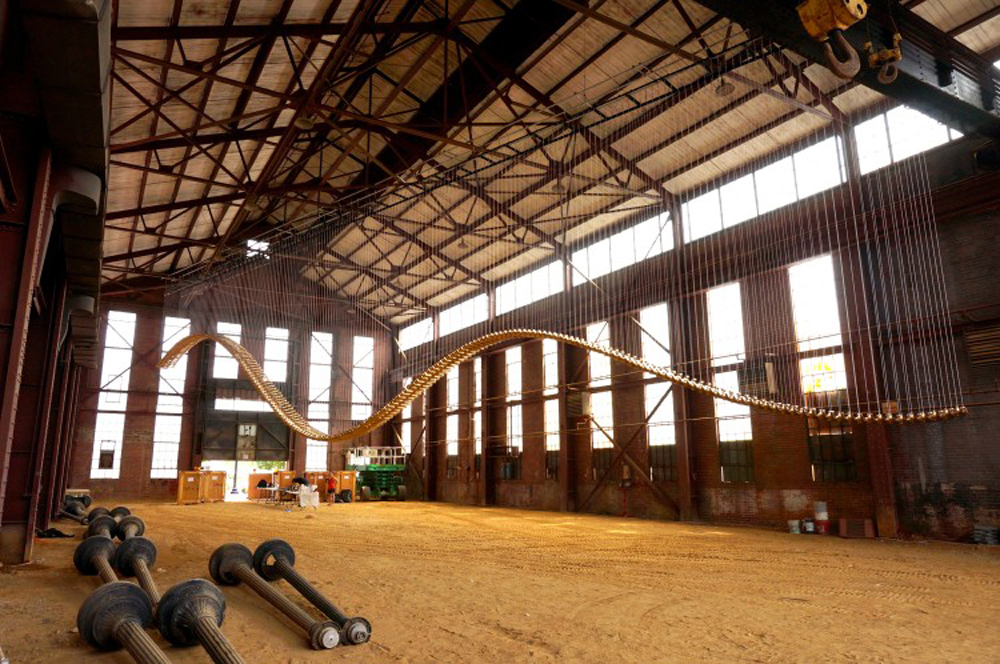 Glenn Kaino’s Bridge read from afar as an assembly of bones or a golden-slatted rope footbridge, though closer inspection revealed that the 200 “slats” are in the form of a familiar arm, not quite recognizable out of context.  The slats were made from a contemporary cast of athlete Tommie Smith’s limb: when receiving his gold medal for the 200-meter Olympic Race in Mexico City, Smith raised his fist in the iconic Black Power gesture of civil and human rights solidarity.  This moment and image has since been employed in service of myriad causes and ideological beliefs, and has in turn constructed the identity of the man himself in irrefutable ways.  Addressing the power of cultural memory and its simultaneous reconfiguring and dissipation, Bridge reached for more than a depiction of an event, instead highlighting in physical form the architecture and path of created, revised, reformed, and remitted cultural narrative.

The image of Smith is part of a lexicon of events and happenings associated with the pursuit of social justice, equality, and the advancement of a social cause.  Kaino’s sculpture was thus constructed of those ideological and symbolic referents, changing and morphing over time, stepping through history just as the bridge moves through the space. Siting this sculpture within Washington, D.C. – the capital of the United States and epicenter for political change and justice – this installation made an even more poignant statement.

Kaino (b. 1972; Los Angeles, CA) transforms conventional materials and forms through a process of working that mobilizes the languages, logics, and economies  of other creative disciplines as raw elements in artistic production. Conceiving his practice as conceptual kitbashing, akin to a model maker’s way of appropriating readymade kits to assemble unique models, Kaino synthesizes objects, performances, and site- and situation-specific encounters by reconfiguring the conditions and construction mechanisms of distinct cultural spheres into ecologies of making in which seemingly disparate materials and ideas are brought into contact. In bringing external frameworks of thought and production to bear on aesthetics, Kaino is able to assemble improbable moments in which antithetic principles are synchronized and irreconcilable materials exist in symbiotic forms – testing the potential of artistic gestures to bring about tangible transformation and to incite, even if only temporarily, other ways of being and knowing in the world.

This work was presented as part of Alter/Abolish/Address: 5 site-specific commissioned projects throughout Washington, D.C. as part of 5×5:2014, a District-wide program of 25 contemporary, temporary public art projects dedicated to exploring new perspectives on the city through the lens of 5 curators, presented by the D.C. Commission on the Arts and Humanities.