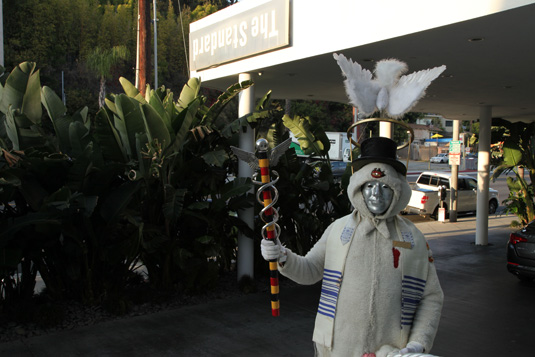 Acting as a guest of The Standard Hotel, Hollywood, Adam II, the Late Paul Cotton embodied the persona of the “Astral-Naught Rabb-Eye” while interacting with the guests and staff of the hotel throughout his stay.

Adam II, the Late Paul Cotton (born 1938, Fitchburg, MA) is an Oakland-based performance and multi-media artist who uses the body (as both a sculptural and performative medium) to explore the constructs of religion, mythology, and linguistics. His work is highly influenced by the writings of philosopher Norman O. Brown.

Adam II studied Art History at the University of Rochester and sculpture at UC Berkeley where he met Eugenia P. Butler, daughter of gallerist Eugenia Butler, Sr. After a trip to Los Angeles to meet Butler’s family, Butler, Sr. invited Adam II to participate in Conception/Perception (1969): a group exhibition at Eugenia Butler Gallery featuring the work of John Baldessari, Douglas Huebler, Joseph Kosuth, and others. Thereafter, Adam II was included in two additional exhibitions at the gallery: 18th and 19th Century Tantric Works (1969) and Wester Sun-Day (1971).

After the gallery closed in 1971, Butler, Sr. and Adam II moved to Berkeley where Adam II continued to perform and practice art with Butler, Sr.’s partnership and participation.

Special thanks to The Standard Hotel, Hollywood