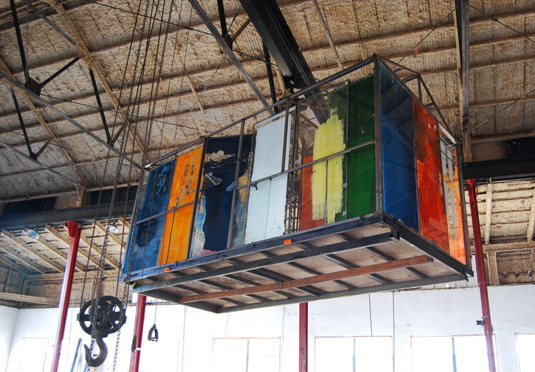 An Artifact Caused by a Bright Cloud

As part of Nothing Beside Remains, Fischer presented a multi-part project focused around the continued activation of a sculpture of a mobile glass house. Unlike some of Fischer’s previous works that focused on the renewal of salvaged materials, this piece began with a just-built sculpture, which was subsequently deconstructed. The preliminary manifestation of this ongoing process was the sculpture’s transport from New York to Marfa, orchestrated by Fischer and enacted by his collaborators: Noah Chamis, Graham Hamilton, and Dan Herschlein. En route, this sculptural environment was used to create a series of new videos and photographs that comprised Fischer’s multi-media installation at The Locker Plant. Upon arrival, the sculpture was suspended inside The Ice Plant, becoming a site of ongoing transformation: the temporary inhabitation of the work, a continual disassembly and reconfiguration into new works (as part of Fischer’s residency with The Chinati Foundation), and, ultimately, the work’s (possible) destruction in a performative act, is to become a culminating video.