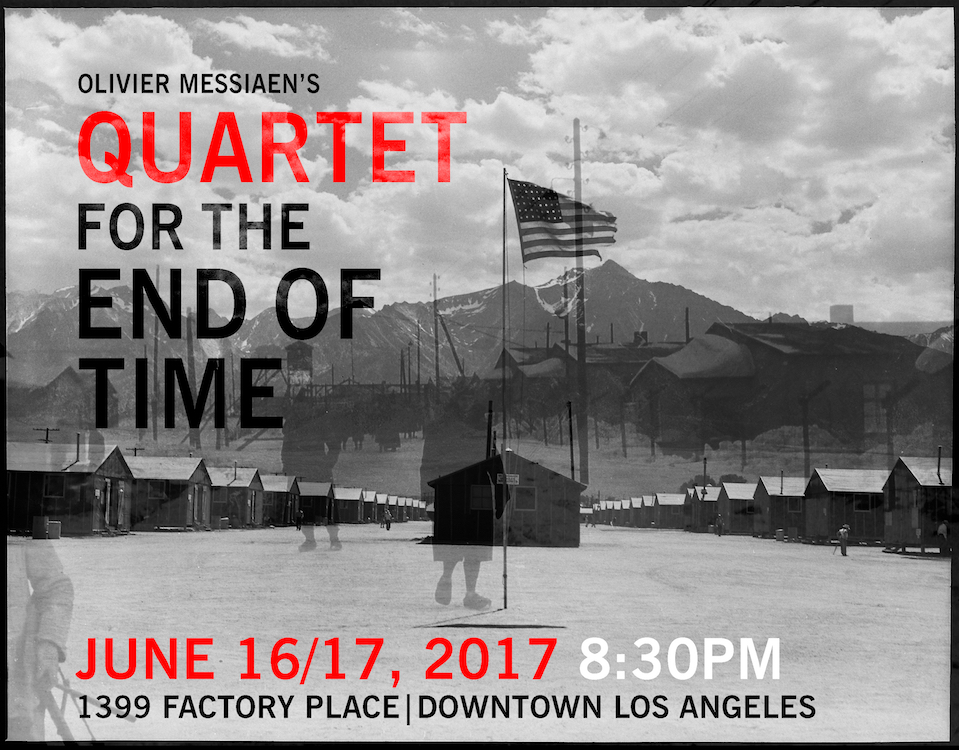 Quartet for the End of Time

In 1939, at the onset of WWII, thirty-one year-old French composer Olivier Messiaen was drafted into the French Army, and was eventually captured and imprisoned as a POW in Stalag VIII A, at Görlitz, Germany. It was here, on January 15, 1941, in the camp’s theater barrack and amidst bitter cold, that Messiaen’s composition, Quartet for the End of Time (Quatour pour la fin du Temps), first premiered to an audience of prisoners and German prison guards. Prior to his capture, Messiaen had begun to compose what would become one part of Quartet in 1940 while stationed in Verdun. There, he also met and befriended cellist Etienne Pasquier and clarinetist Henri Akoka, who were to become fellow prisoners at Stalag VIII A, and who, along with a fourth POW, violinist Eugène Jean Le Boulaire, comprised the quartet of musicians who first performed Quartet for the End of Time.

Messiaen, a devout Catholic, was less interested in “the end of time” as an apocalyptic overlay than as a temporal one; he found inspiration for the work in a passage from Revelation referencing the collapsing of time into eternity (“There will be no more Time”). But the oppressive conditions within which the work was conceived and presented—set against the backdrop of wartime conditions in Nazi Germany—contribute to the work’s broader narrative and reception.

It is because of this context that multidisciplinary artist Susan Silton felt compelled to present Quartet, to which she began listening soon after the 2016 US Presidential election. Citing the alarming connections between past and present conditions, especially vis-à-vis the current targeting in this country of individuals on the basis of religion, race, and/or gender, Silton has referred to the work’s “sense of urgency as well as its mournful acceptance—the coexistence of resistance and resignation, anger and calm.” Silton’s staging of the work was sited in the heart of downtown Los Angeles’ thriving art district—an area that has itself been a contested site with respect to issues of displacement, gentrification, and invisibility. The artist addressed some of these latter issues in her work, A Sublime Madness in the Soul (2015), an operatic work presented through the windows of her then-studio on Anderson Street, which was visually and audibly experienced from the now dismantled 6th Street Bridge.

As part of the performance of Quartet, Silton invited LA-based choreographer Flora Wiegmann to create a spare score for four dancers, and chose to stage the work with an all-female cast of musicians and performers, in stark contrast to by and for whom it was first performed.

“Music serves for us as a conduit to the ineffable,” Olivier Messiaen once said. In this unsettling time of political and social uncertainty, Silton’s presentation of Quartet for the End of Time suggests the power of music to capture nature, social/political upheaval, the breadth of humanity, and the significance of reframing artistic works from the past in order to reflect on the present. In such times, music can perhaps elicit, identify, or explain the full range of human emotions when words alone seem to fail.

About Susan Silton
Susan Silton resides in Los Angeles. Her multi-disciplinary projects engage multiple aesthetic strategies to mine the complexities of subjectivity and subject positions, often through poetic combinations of humor, discomfort, subterfuge and unabashed beauty. Silton’s work takes form in performative and participatory-based projects, photography, video, installation, text/audio works, and print-based projects, and presents in diverse contexts such as public sites, social network platforms, and traditional galleries and institutions. Her work has been exhibited/presented nationally and internationally at Museum of Contemporary Art, Los Angeles; SFMOMA, San Francisco; Susanne Vielmetter Los Angeles Projects; LA><ART, Los Angeles; Hammer Museum; ICA/ Philadelphia; MAK Center for Art and Architecture, Los Angeles; and Australian Centre for Contemporary Art, Melbourne, among others. Projects include the commissioned installation, In everything there is the trace at USC Fisher Museum, the book project, Who’s in a Name? (both 2013), and the site-specific opera, A Sublime Madness in the Soul (composed by Juliana Snapper, 2015), which presented through the windows of the artist’s then-studio in downtown Los Angeles. In November, 2015, Silton’s Whistling Project was included in SITE Santa Fe’s year-long series of exhibitions, SITE 20 Years/20 Shows, which included a commissioned performance by Silton’s women’s whistling group, The Crowing Hens. She has received fellowships and awards from the Getty/California Community Foundation, Art Matters, Center for Cultural Innovation, Cultural Affairs Department of the City of Los Angeles, The MacDowell Colony, Banff Centre for the Arts, Durfee Foundation, The Shifting Foundation, and most recently, Fellows of Contemporary Art (FOCA). Silton’s work has been featured in numerous publications including Artforum, Art21, KCET’s Artbound, Art in America, X-TRA, ArtLies, Flash Art, and Cabinet.

And with Cristina Frias

This project was supported in part by a 2017 Fellows of Contemporary Art FOCAFellowship, granted to mid-career artists in recognition of their significant contributions to the California art scene.

Support for EXCHANGE VALUE is Provided by: