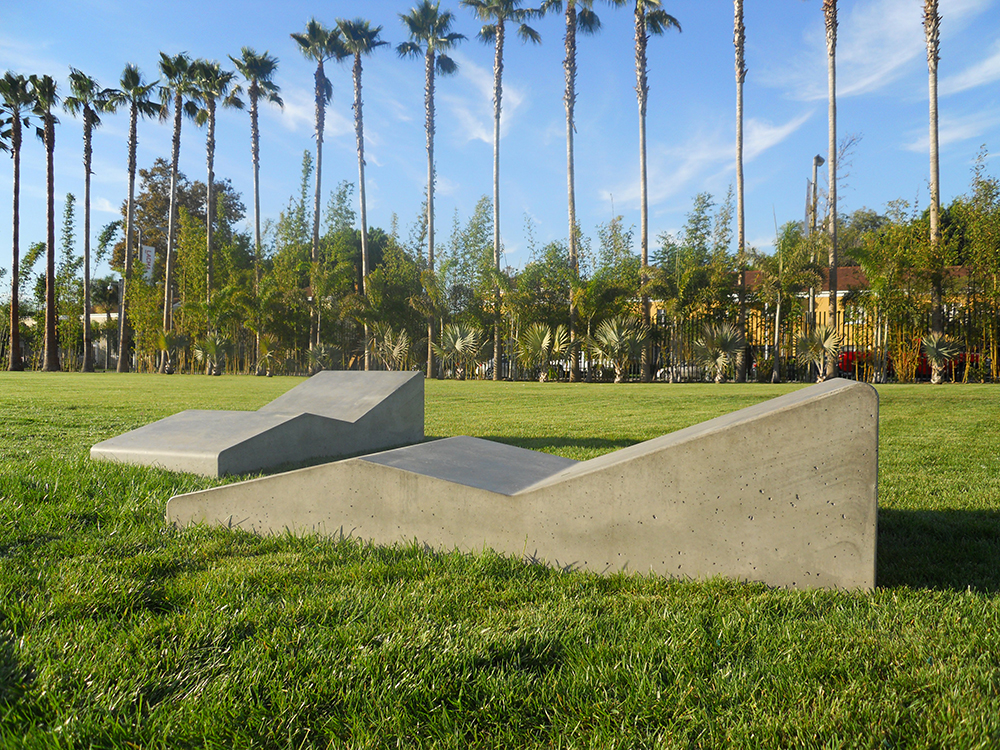 From October 28th, 2010 – October 1, 2011 LAND, in collaboration with the Los Angeles County Museum of Art (LACMA), presented a new commission from Mexican artist Teresa Margolles. Untitled (2010) features a series of six custom-made concrete benches exhibited near the north piazza of the BP Grand Plaza at LACMA.

Often using violence, death, and the structures of power that surround them as her subject for exploration, Untitled examined the effects of ongoing conflict on contemporary culture. The cement used to construct these benches was mixed with a liquid that was used to clean corpses in an autopsy room in Mexico – four gruesome fatalities, all products of drug- and gang-related violence. These functional benches, intended for use by the museum audience, took the form of an abstracted human body lying prone on the ground, thus reflecting their content onto the visitors.

Margolles used this format previously, presenting a set of six benches at Jardin Botánico Culicán, a Botanical Garden in Culiacán, Mexico. However, while the form was identical, the ideas that infused this work function as the flipside of those the artist addressed in the preceding group, which were intended to provide spaces of tranquility, monuments to the dead where spectators might find peace in the tragedies. The new works at LACMA, on the other hand, functioned instead as what the artist describes as “perfect embodiments of the spirit of evil,” asking those that might engage with them to feel the overwhelming energy of aggression that produced the infused material. This work was not merely for shock or political gesture, however, as the elegant, minimal aesthetic of the work, their placement (per the artist’s request) in a beautiful, outdoor space, and their use value as a place of rest and contemplation for a passing viewer, additionally suggest the possibility for brutality and poetry to coexist.

Teresa Margolles was born in Culiacán, Mexico where she studied art, communication sciences, and received a diploma in forensic medicine from the Servicio Médico Forense. Her practice involves the development of social and conceptual artistic strategies on the basis of the use of bodily substances and images of corpses. Margolles’s work has been exhibited in different venues around the world, including the Liverpool Biennial (2006), the Kunstverein für die Rheinlande und Westfalen, Düsseldorf, Germany (2007), La Colección Jumex, Mexico (2007), and Kunsthalle Krems, Austria (2008). She was the official representative of Mexico at the 53rd International Art Exhibition, la Biennale di Venezia (2009).

This exhibition courtesy of the artist and Jardin Botánico Culiacán & CIAC.