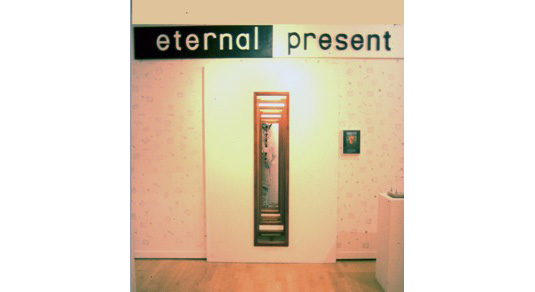 The Random House Converter/Trance-Former (1966 – eternalpresent) was installed at Eugenia Butler Gallery in 1969 as part of the 18th and 19th Century Tantric Works group exhibition as well as in 1971 as part of the Wester Sun-Day solo-exhibition (also referred to as Trans-Parent Teachers Ink.) The piece was also exhibited in 1970 at the Kunsthalle in Düsseldorf, in 1972 as part of Documenta V in Kassel, Germany, in 1998 as part of the Out of Actions exhibition at MOCA, Los Angeles, and in 2008 in Paul McCarthy’s Low Life Slow Life exhibition at the CCA Wattis Institute for Contemporary Arts in San Francisco.

The Random House Converter/Trance-Former was comprised of a series of white canvases, each penetrated by an empty Zen mirror frame (which Adam II considers to be “framing vision itself”) and arranged to form a succession of thresholds (and a resultant optical illusion) that the viewer must traverse, ending with a hanging semicircular sphere of monofilament (which Adam II refers to as the “prism house of the mind”). The installation’s required participation transforms the work into something performative, wherein the viewer becomes both subject and object and must confront the apparent construct of the piece as well as the reality of their own vision and perception.

Eye sees the Random House Converter-Trance-Former as a transformer at the threshold of the information/digital age…where every THING & all information is instantly re-produced visually… or digitally in the eternal present of NOW! This now is the Breath we share…One Breath, One Body. Random House refers to the publishing of Books…The Astral-Naught Bride-Groom is a Living Book… the “Word Made Flesh” is published instantly on line in the information Age in the Camera del Mondo (Camera in Italian means Room….) Trans-Parent Teachers’ work has been painted/sculpted/written along the line of the “Art-Link-Letter” in the Camera Del Mondo since the creation of “The Table of Contents” in 1966, and The Random House Converter/ Trance-Former, 1966.

The Astral-Naught (Word Made Flesh), was born out of the “People’s Prick” which Landed in Eugenia Butler’s Backyard in 1969 to begin the Dionysian Space Project to Land the First Man on the Earth… to fulfill the vision/dream of the Woodstock generation to get us “Back to the Garden.”

The Astral-Naught is a Living Sculpture of Hermes in the Information Age in which we all live simultaneously in the Mystical Body of Living, Breathing Gaia…Mother Earth. Hermes, Messenger from the Gods, is the God of information, technology, cross-roads, Doorways, Marriage/Sexual Union, Commerce and Thieves. The Astral-Naught is The Light of the World/ the Light of Dei.

Eye sees the Random House as the Threshold to the new time and space in which we now Live…As painting and sculpture it continues the vision of Duchamp’s Large Glass, Rauschenberg’s White Paintings, Malevich’s White Paintings. It stands as a Light Painting suggesting illusion and reality and invites meditation on Self and Other, Non-duality, Being both Subject and Object. Thou Art both Audience and Creation. It is a Monu-Mental Threshold for Performance Art in the Eternal Body of the Imagination.

Thou Art the Audience and the Creation

Adam II, the Late Paul Cotton (born 1938, Fitchburg, MA) is an Oakland-based performance and multi-media artist who uses the body (as both a sculptural and performative medium) to explore the constructs of religion, mythology, and linguistics. His work is highly influenced by the writings of philosopher Norman O. Brown.

Adam II studied Art History at the University of Rochester and sculpture at UC Berkeley where he met Eugenia P. Butler, daughter of gallerist Eugenia Butler, Sr. After a trip to Los Angeles to meet Butler’s family, Butler, Sr. invited Adam II to participate in Conception/Perception (1969): a group exhibition at Eugenia Butler Gallery featuring the work of John Baldessari, Douglas Huebler, Joseph Kosuth, and others. Thereafter, Adam II was included in two additional exhibitions at the gallery: 18th and 19th Century Tantric Works (1969) and Wester Sun-Day (1971).

After the gallery closed in 1971, Butler, Sr. and Adam II moved to Berkeley where Adam II continued to perform and practice art with Butler, Sr.’s partnership and participation.