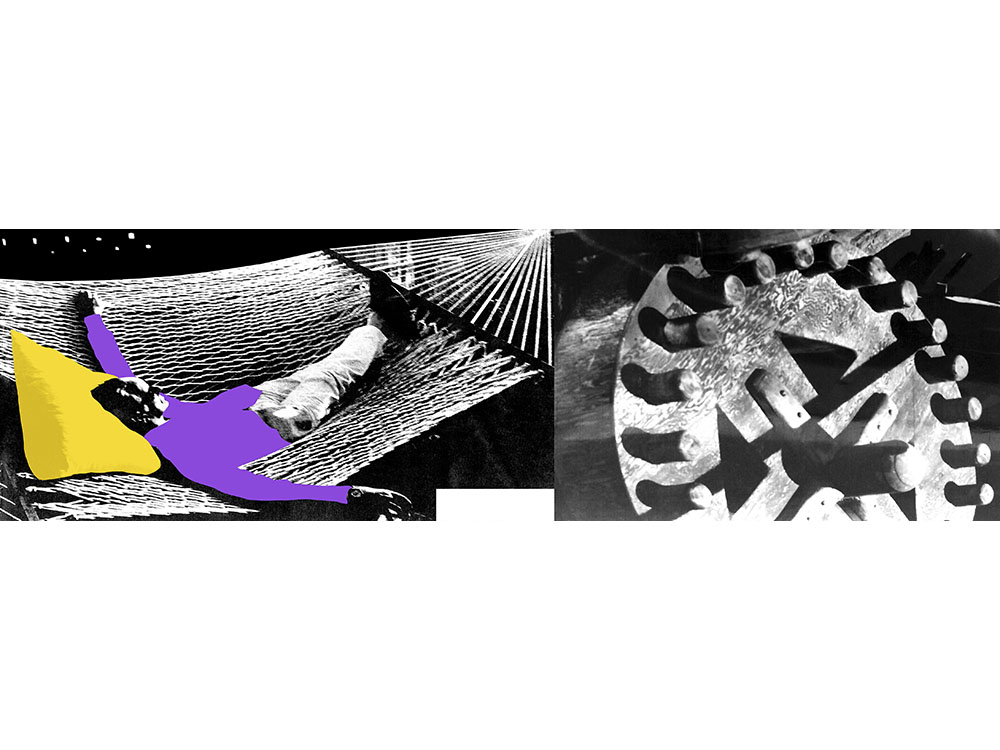 John Baldessari’s chapter of The Manifest Destiny Billboard Project, entitled Love and Work, employed the traditional advertising trope of repetition, as all 10 of the billboards display the same image, scattered throughout the San Antonio, TX area. Using this tactic, the image was designed to be engrained in the minds of commuters, drawing connections between the disparate locations of the billboards.

Baldessari’s diptych image conveyed the ultimate dichotomy of Manifest Destiny and the American Dream, further clarified in the series title: Love and Work. A large gear mechanism dominates the right half of the composition, depicted in grainy black and white and somewhat blurred, as if in motion. This heavy machinery alludes to the industrialism that was the foundation of American capitalist development, and the physical labor underlying the (often-unattainable) goals of the historical American Dream.  The gear similarly implies being a part of a larger machine – that we are each a cog in the wheel, so to speak.  The artist juxtaposes the gear with an image of pure, domestic relaxation: a male figure reclines, arms akimbo, on a hammock.  The vibrant yellow and purple hues superimposed like a light filter over this underlying black-and-white image suggest a bygone era, and highlight the ultimate goals of our labors: happiness and love.  The reclining figure and gear maintain the same angled position, drawing a visual parallel between man and machine, leisure and industriousness – the precarious balancing act that is both America’s ambition and the source of many of its most salient problems.

John Baldessari (b. 1931; National City, CA) is a pioneering Santa Monica, CA-based conceptual artist whose experimentation across a range of media (collage, printmaking, video/film, photography, digital art, painting, and performance) developed into a defining aesthetic that appropriates mass culture and plays with established conventions and physical form to decontextualize, juxtapose, repeat, and create language, text, and found imagery or objects, particularly in relation to the media, art, and film industries. He is a key founder of Southern California Conceptualism, an influential educator of younger artists, and a legend of postmodern art in the late 20th Century.

This project is made possible by an award from the National Endowment for the Arts: Art Works and with support from Clear Channel Outdoor.

Special thanks to the McNay Art Museum, the McNay Contemporary Collectors Forum (MCCF), and the City of San Antonio Department for Culture & Creative Development.