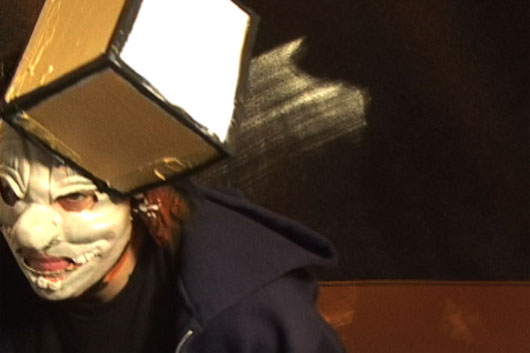 For the second Frame Rate, Harry Dodge presented a new video: Unkillable (2011), a perverse, black comedy that investigates the potency of images made from language. Performing alone, in a mask, Dodge renders in obsessive detail – shots, cuts, audio – a would-be film, a “text-story” made up of progressively appalling events. While critiquing conventional film grammar and tropes, Unkillable also manages to explore the queasy coexistence of tenderness and brutality, the nature of momentum (narrative and otherwise), and the often incomprehensible wretchedness of irreversibility itself.

Cole presented a lecture, field recordings, and photographic documents that illuminate the rich musical history of Detroit. Focusing specifically on 1967, Cole told the story of The Algiers Motel, the epicenter for the city’s recording studios and clubs, where soul musicians The Dramatics were sequestered during the height of the ‘67 riots. The lecture was followed by Cole’s recreation of some hits from Motown and a DJ set culled from the city’s extensive musical output.

Harry Dodge is a Los Angeles-based visual artist, writer, and director whose videos, sculptures, and installations focus around the exploration of materiality, the unnamable, between-ness, and post-binary possibility. Dodge’s work has been exhibited at Elizabeth Dee, New York; the Museum of Contemporary Art, Los Angeles; the Getty Institute, Los Angeles; the Hammer Museum, Los Angeles; and at the Sundance Film Festival, among others. Other recent activities include a talk and video program at Light Industry in Brooklyn and a curated room at the Hessel Museum in upstate New York.