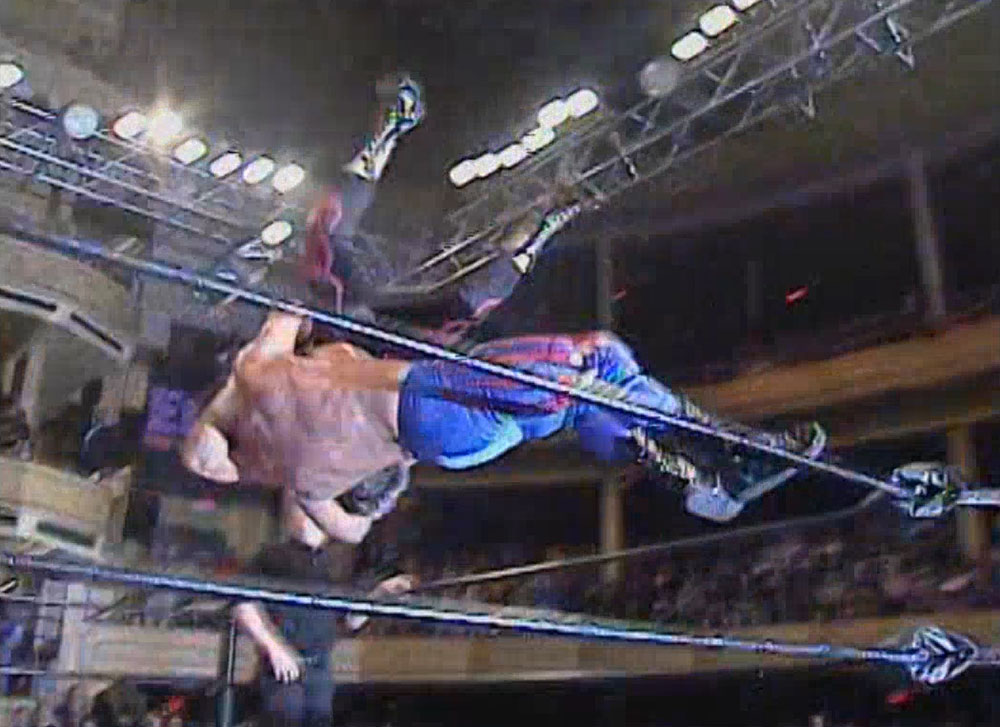 What do wrestling (Extreme Championship Wrestling, or ECW) and steroids, Nancy Grace, Willie Nelson, and Janis Joplin have in common? In his video Legacy Pipebomb, artist Gabriel Madan layers these seemingly disparate figures and subjects, with personal interludes including a text-to-speech reading of one of his sister’s blog entries detailing an accident with her daughter; a recording of his father singing Nelson’s “Angel Flying Too Close to the Ground,” at his daughter’s (Gabriel’s sister) memorial, with Madan singing over the recording; and a phone call between the artist and his mother in which he asks her to sing Joplin’s “Mercedes Benz.” The video also introduces the concept of Kayfabe—the performed fictional entertainment that is the hallmark of wrestling—and focuses on the 2005 ECW One Night Stand match between two hugely popular wrestling figures—Eddie Guerrero and Chris Benoit. The lives of both wrestlers ended tragically: Benoit killed his wife and young son, then took his own life and Guerrero died of a heart attack from complications due to extended drug use (steroids). As the match continues, artist D’Ette Nogle’s calming voice reads from a transcript of an episode of Headline News’s Nancy Grace Show, in which Grace attributes the tragic incidents to doctors who over prescribed steroids and painkillers to the wrestlers. Nogle’s soothing tenor is a stark contrast to Grace’s shrill accusations and hyperbole, adding another layer to this club sandwich of a narrative. This unlikely mix of the public spectacle of wrestling as entertainment with personal and public tragedies is unsettling, unnerving, and deeply compelling. Madan’s short and equally personal video, Puppet Show (4.19.2015), 2020, will lead off the program and there will be a Q&A with the artist immediately following the screenings.

About the Artist Gabriel Madan was born in 1993, in Miami and lives and works in Los Angeles. In August 2020, he graduated from Art Center School of Design and his graduate exhibition, Sana Sana, was presented at the PPR Gallery & D8 at Art Center. He received his BFA in Printmaking from The University of Miami.

This screening is made possible by a grant from the City of Los Angeles Department of Cultural Affairs.