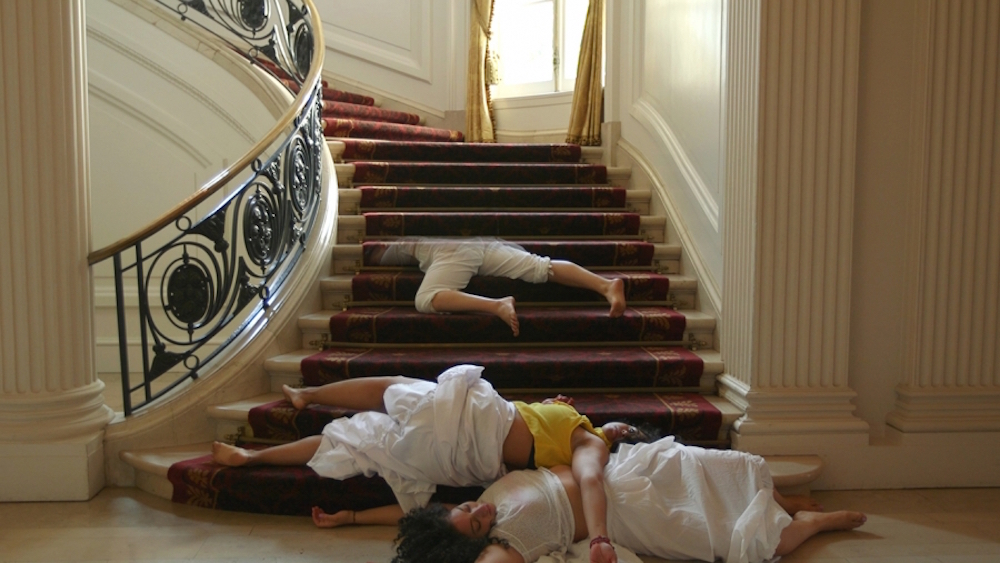 Exhibited at the Blue Roof Studios Arts Festival, LAND presented Apparitions by Carolina Caycedo (a video produced for her recent show at the Huntington Library) as part of the Frame Rate series. Developed through a joint collaboration between the Vincent Price Art Museum and the Huntington Library, Art Collections, and Botanical Gardens, Caycedo’s Apariciones / Apparitions reconceptualizes spaces within the Huntington through African and indigenous spiritual and dance practices from the Americas. In this work, dancers embody past entities returning to the earthly realm. Caycedo worked with choreographer Marina Magalhães to develop gestures inspired by the Candomblé religion and the goddess Oxúm, a deity of water, pleasure, fertility, and sexuality.

Black, brown, and queer dancers appear in various Huntington locations—dressed in Oxúm’s signature color of deep gold—and perform rituals of labor such as tilling land, washing gold in a river, or shaking the entire body, as when a deity or orixá mounts a mortal. The figures inhabit historically white spaces in evocative, unconventional ways, marking the museum’s collections as sites for ritual, enjoyment, and divination. Informed by the Aymara aphorism “Qhip nayr uñtasis sarnaqapxañani,” which roughly translates to “looking back to walk forth,” Caycedo’s work introduces a present in which the past refuses to be static.

ABOUT CAROLINA CAYCEDO: Born in London to Colombian parents, Carolina Caycedo has lived and worked in Los Angeles since 2012. She has developed publicly engaged projects in major cities across the globe, from Bogotá to London, New York to Paris, and San Juan to Tijuana. Her work has been exhibited at several international biennials and has been the subject of solo shows in galleries from Los Angeles to Berlin. Her artist book Serpent River Book was part of the A Universal History of Infamy exhibition at LACMA, and she recently participated in the Hammer Museum’s Made in LA 2018 exhibition.

The Frame Rate series is an on-going program with an eye towards film, video, and the moving image in general.