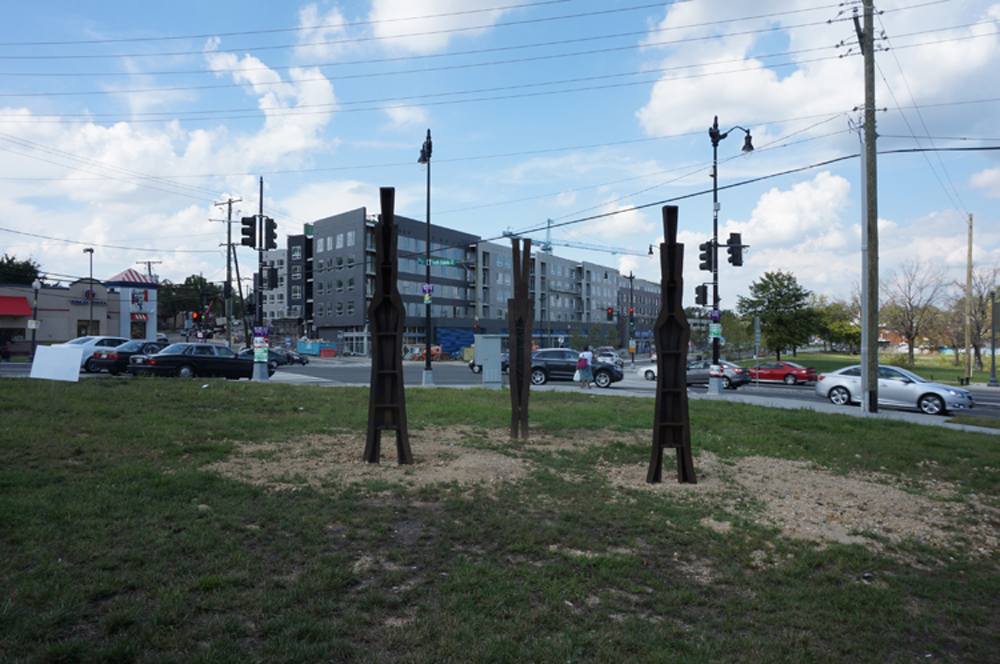 Common Crossings (Riggs & Dakota) was a triad of steel railroad “frogs” (weighing one ton each), which are traintrack components used as switches to change the direction of trains and allow different tracks to cross each other. Vitale altered them further by installing them upright, as monuments of change, totems to the variable nature of movement and direction. Particularly relevant in the nation’s capital, the works, which were made from the structures symbolic of American industrialism and Westward Expansion, referenced this formidable past, while simultaneously altering the tracks’ function and purpose.

Evoking a body of otherworldly beings, the works stood in a triangulated formation, echoing the shape of the corner on which they were installed.  Presiding over this busy intersection where cars commonly cross through, the sculptures – which themselves allowed for similar intersections in a past era – subtly reflected this history.

Vitale (b. 1973; New York, NY) is a New York-based artist who uses performance to activate her architecturally and industrially referential sculptures, which are often made of found/discarded materials manipulated by processes such as burning, torching, or hammering.

Various programs and activations took place throughout the course of the exhibition in Washington, D.C. in collaboration with Pleasant Plains Workshop.

This work was presented as part of Alter/Abolish/Address: 5 site-specific commissioned projects throughout Washington, D.C. as part of 5×5:2014, a District-wide program of 25 contemporary, temporary public art projects dedicated to exploring new perspectives on the city through the lens of 5 curators, presented by the D.C. Commission on the Arts and Humanities.